Well, as it was not working, at least I got a very good deal on the bundle of old goodies!

I brought the SE home and open it right away for an inspection:

TIME TO TRY FIXING IT!

Before anything else, I removed the RAM (carefully as these plastic holders easily breaks - one actually did crack, but I was able to glue it back together).

I then removed the exploded battery and brought the logic board to the backyard to wash it:

Using isopropyl alcohol and an old toothbrush, I started to clean the battery leak signs from the board:

I also noted that the 2 electrolyte capacitors near the battery had swollen bodies, so I order replacements for the C3, together with the axial C4 (bottom blue cap on the photo above) and C13 (top one).

As I heard from the retro Mac community that this model is not really prone to have their axial capacitors failing, I only replaced the ones near the battery. One was missing (C3), the other ones that either look very corroded or swollen: C13, C4, C10 and C9.

To replace the capacitors above, first I used a scalpel to clean up the existing capacitor corroded pads. This allowed me to add new solder to them. Then I used a solder pump to remove the fresh added solder mixed with the old one and carefully remove the old caps terminals. I measured the capacitance of the bulged axial blue caps and they were indeed off their original specs. The yellow caps were still measuring ok, but it was a smart idea to replace them anyway due to their corroded/rusty terminals.

I inspected the nearby resistors, and despite not being in their best shape, they still seem to be working as they should.

After replacing the capacitors above, I used a scalpel to clean in between each of the filter pads that due to corrosion were basically shortened out. Here is a view using a digital microscope:

This part was very tedious, but necessary. After checking each of the filter pads for continuity with a multimeter, I confirmed they were once again making their proper connections.

Now, it was time to look for obvious open/corroded traces near the affected area. I used a scalpel to remove the green insulating varnish and checked the copper traces for continuity. I found at least 5 traces were interrupted/open due to corrosion.

To fix the broken traces, I followed this great traces repair tutorial made by Bruce from Mac Yak. Using a very thin 34 AWG magnetic wire, flux and some solder, I rebuilt the damaged traces and applied solder mask to protect them from corrosion.

Now with the traces rebuilt, I decided to give it a try and power it on:

Despite the double line error, the code was pointing to RAM error connection. I re-seated the RAM sticks and still got the same error.

Then I took the board out again for another more throughout inspection. I found that some through-hole pads weren't making contact to the other side of the board. Using the same 34 AWG wire, I reconnect these pads from one side to another:

I put the board back together, powered it on and crossed my fingers...

But no bong and when I load the OS with my Zip drive, no sound whatsoever...

I noticed, however, that the sound using the headphone output.. that is a good sign!

Again, I took the logic board out and re-check for traces and the J11 speaker connector. Everything seemed to be ok, but the female connector from the speaker was a little loose on the male J11 plug. I disassembled the speaker connector and soldered some bare wire to make the connection to the J11 "tighter". I also measured the speaker resistance to make sure it was still good, and it was as per spec (weirdly, it has an unusual 63ohms impedance).

Still, no sound coming from the speaker...

After some more research, I got an important hint from this great Macintosh repair book:

I added some kapton tape on the damaged part of the insulating portion of the RFI shield and tried again...  YAY, the sound is back!

Mission accomplished! This Macintosh SE SuperDrive was saved and is now working perfectly once again.. Seeing the happy Mac after the "bong" really face put a smile on my face :) 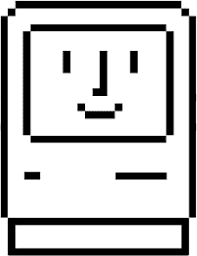