I got this player for next to nothing on a thrift store near me (by far the best item I was ever able to find on a thrift shop!). I couldn't believe when I saw that it was not only in great shape (including the original Sony sticker!), but it also included the original leather case and power adaptor.
As it was somehow expected, the unit wasn't working. When pressing the play button, the displays would light up, disc would spin (a good sign) but it would give an error and shut down.
Upon some research, this problem is relatively common and occurs due to the lubricant on the CD mechanism being dried.
It was time to open it up!
Unfortunately, I forgot to take pictures of the mechanism before I cleaned it. But I used isopropyl 99% and foam cotton swabs to clean up the threaded rail and gears. After cleaning and with the player still open, I was able to test it and I the CD was able to play it! However, I couldn't play all the CD tracks and the sound was muffled on the right side and volume overall was very low. This was "smelling" like a capacitor leak issue.
Time to dig deeper. I found this very helpful post on the great portables forum (Stereo2Go.com) - from the user Jorge.
It was time to remove the centre gear and completely clear it from the old grease.

While the Windex was doing its wonders to remove the old grease from the gear, it was time to investigate the audio issue: looking for SMD caps! 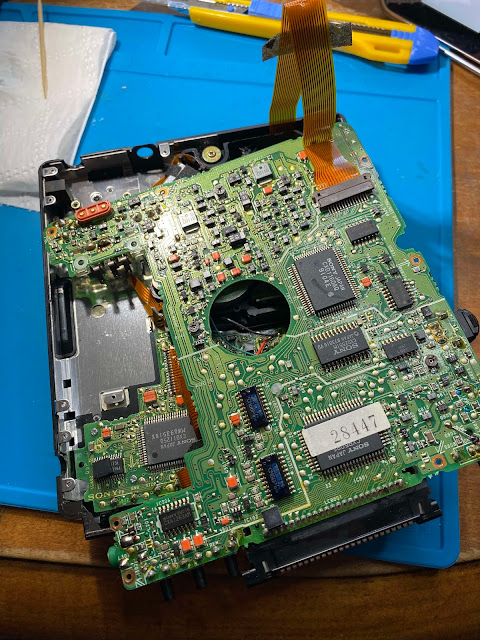 Now, continuing the investigation for the bad sound issue. On the top of the main board, something smells fishy (literally).

After removing the old caps, I washed the board with some soap and distilled water. Then rinsed with 99% isopropyl alcohol and let it dry. Luckily, no damaged traces that I could see. After the board dried, I installed new Panasonic audio-grade replacement caps (all 3 caps had the same spec= 100uF - 6V).

After the new caps were installed, I cleaned up the gear and its locking washer with isopropyl alcohol, dried it up and re-installed it. After re-installing
Now, after putting it all back together, it is time to test it! 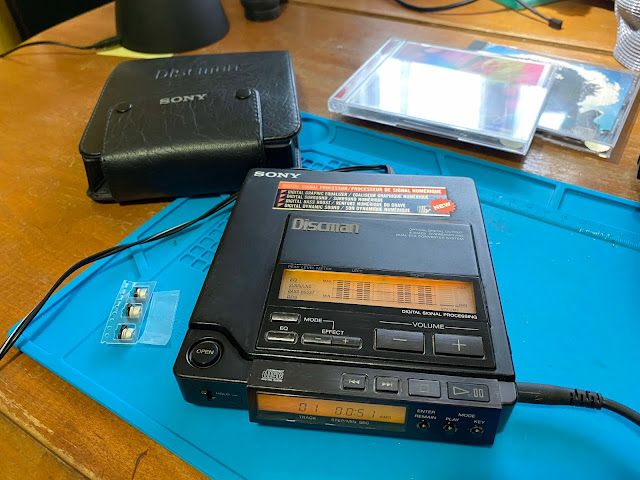 And it is ALIVE! Playing all tracks now works and no more sound issues: as a matter of fact, IT SOUNDS REALLY GOOD!
Now, as you may probably have realized. This Discman model uses a Sony proprietary rechargeable battery model BP-2EX, and without a battery, this Discman is not really "portable".
I need to find a working battery...

These BP-2EX batteries haven't been manufactured for at least a decade. And if you are lucky enough to have one, they are no longer holding any charge. These batteries were also lead-acid which is an older and less efficient technology when compared to lithium-ion (Li-On) ones.
Upon researching for replacement rechargeable batteries I came across this post on tapeheads.net about re-building the BP-2EX. I later found that someone also created a 3D designed battery adapter that holds two standard li-on 10440 3.7V batteries.
The adapter uses 2x 3.7V 300mAh 10440 batteries in parallel, giving a total output of 600mAh. Even though 600mAh is not great, is not too far off from the original BP-2EX battery.
So here is the battery rebuilt process:

(*) Caution! Even though it works, charging your DIY battery using the OEM Power Adaptor will cause the batteries to overheat due to higher current provided by the charging circuit. By doing so, you will be shortening the batteries life and potentially deform the battery adapter (which was printed in PLA) and/or player on the long run. It is recommended to charge the batteries externally using an appropriate Li-On charger such as this one: 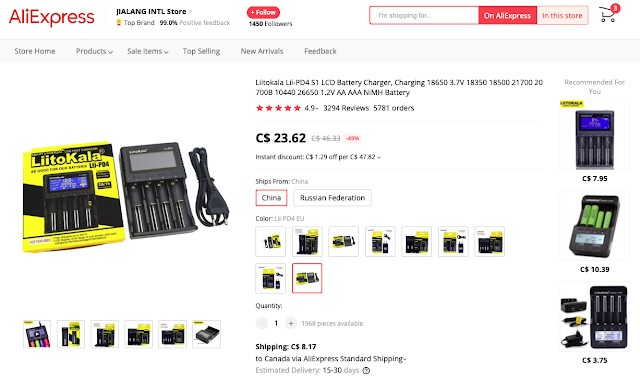 I hope you enjoyed the post and happy high-quality CD listening... and now on the go again!